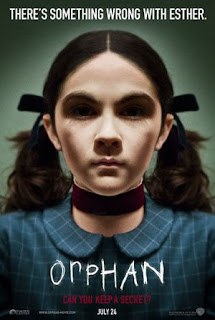 I couldn't help but compare the experience of watching ORPHAN to that of watching a really close baseball game. It starts off with two teams matching zeroes through the first few innings. As it becomes clear that it's going to be a pitchers' duel, the intensity level begins to grow. Each pitch is more important than the last and you wonder who will blink first. Defensive gems provide bursts of excitement, killing potential rallies and keeping the duel intact. Late in the game, your team finally breaks through and takes a slim one-run lead. Now the pressure is on the pitcher -- every pitch is key, tension is heightened and the slightest mistake can cost your team the game. Maybe he walks the leadoff man in the 9th, bringing the go-ahead run to the plate -- one mistake and previous eight innings are all for naught. But then he fools the batter with a killer breaking ball for strike three and the ballgame is over and everyone rejoices!

ORPHAN provides a similar range of emotions. It's a tremendous thriller about a family who, in the aftermath of tragedy, decides to adopt a child. The child, a precocious Russian girl named Esther, is polite, creative, maybe a little different and wise beyond her years, but there's nothing wrong with that, is there? Well, in this case there is... because Esther is not just different.... she's F'ING EVIL AS HELL. This is easily one of the best "evil child" movies I've ever seen, surpassing such films as THE OMEN, THE GOOD SON and CHILDREN OF THE CORN, and on par with granddaddy of them all (and obvious direct influence), THE BAD SEED. Esther pulls absolutely no punches -- she's brutal, conniving, ingenious -- the things she says and does are, at times, jaw-dropping. The actress, 12-year-old Isabelle Fuhrman, is nothing short of astonishing.
The movie does a fantastic job of building up the characters and the backstory, both key components for which most horror films rarely take the time. What at first seems like a nice, normal family that has experienced a major tragedy is, in fact, a deeply messed up family that has gone through many difficulties over the 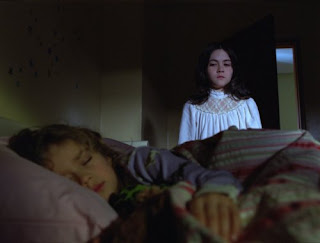 years -- the details of which are revealed piece by piece, layer by layer, as Esther's influence causes them to unravel. I found myself audibly rooting for certain characters, spitting vitriol at others (Peter Saarsgaard is particularly infuriating as the clueless dad) and dreading the worst -- the movie is so well-crafted and defies enough convention that you are never quite sure if anyone is safe. They wouldn't DARE kill off the adorable little deaf girl.... would they??
The film occasionally teeters on the edge of ridiculousness and could have easily turned into a trainwreck if handled improperly -- remember that 9th inning leadoff walk? -- but fortunately, such disaster is always averted. If you are a horror fan, ORPHAN is an absolute must-see. It is a complete-game shutout of a movie, making the right pitches at the right moments, making the game-saving plays, getting the clutch hit and ultimately slamming the door.
There is indeed something wrong with Esther... and it RULES.
Posted by Ben at 11:29 PM 3 comments: