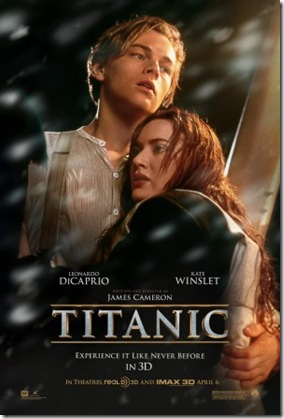 "It's been 84 years and I can still smell the fresh paint," recalled old Rose as she began her epic tale of love and tragedy at sea. Well, it has now been nearly 15 years since I first saw James Cameron's masterpiece, TITANIC, on the big screen, and I can still remember being fully captivated by one of the greatest spectacles ever to grace the silver screen. The much-heralded 3D re-release officially opens tomorrow, but I was fortunate to see an advance screening in February, and I can honestly say that it is not only the best 3D conversion we've seen so far, but it remains one of the most awe-inspiring cinematic experiences of all time.

I'm not ashamed to admit that I totally got caught up in TITANIC-mania in late 1997 and well into '98.  I loved the movie then and I love it now.  As a 20-year-old, I had only just begun to tap into what would soon evolve into an full-fledged passion for movies, and my obsession with all things TITANIC played an indelible role in that process.  Despite what naysayers may say now, this movie was a phenomenon. It's one of the few movies that really does have something for everyone... and everyone saw it.  It made over $600 million in North America alone (still #2 all-time behind Cameron's AVATAR), and was #1 at the box office for fifteen consecutive weeks (a astounding streak that will likely never be broken, now that the movie-release process is much different and more front-loaded). It was nominated for 14 Oscars and won 11 of them, including Best Picture. Leonardo DiCaprio and Kate Winslet were already well-established actors, but still fresh-faced, and they suddenly became mega-stars.  For better or worse, you couldn't turn on a radio without hearing Celine Dion's "My Heart Will Go On," and James Horner's beautiful score is one of film's most recognizable.  It was crazy. Now, nearly 15 years later (and almost exactly 100 years after the event itself), TITANIC remains a landmark cultural event and a monumental achievement that deserves to be ranked alongside GONE WITH THE WIND, 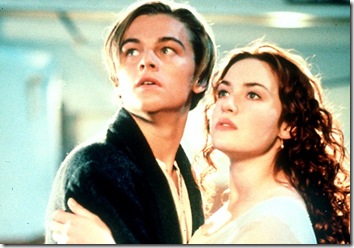 THE TEN COMMANDMENTS and other huge, sprawling, groundbreaking and beloved epics. But even aside from all that, it is just a damn good, wildly entertaining motion picture.

The biggest knock against TITANIC has always been that the script sucks (indeed, Best Screenplay was NOT one of those 14 Oscar nods). But you know what? While it may be cheesy as times, it is also rife with quotable dialogue. James Cameron may not be Shakespeare, but he knows what he's doing.  At its core, the story is simple -- poor boy meets rich girl aboard ill-fated ocean liner -- and loaded with broad characters and archetypes.  But the star-crossed love story is timeless, and even if Leo & Kate may be a little embarrassed by it nowadays, their combined talents and extreme likeability helped take Cameron's material to a much higher level. The supporting cast is equally memorable, from Billy Zane's scene-chewing turn as the dastardly Caledon Hockley, to Bernard "King Theoden" Hill’s unfortunate Captain Smith, to Victor Garber as the steadfast Mr. Andrews, to Gloria Stuart’s powerful foundation as old Rose. Over the course of 3 1/2 hours, we become so familiar with such a vast array of characters that when the time comes, we are fully, emotionally invested in their fates. Of course, the real star of TITANIC is the ship and its tragic end.  No matter how you feel about the more basic elements of the movie, there can be no denying Cameron's genius here.  His attention to detail is nothing short of astonishing, allowing us to explore all of the ship's nooks and crannies and yes, even learn a thing or two.  And once the seemingly-unsinkable ship hits the iceberg and that hour-long climactic action set piece begins... my God, it is just as harrowing and eye-popping today as it was 15 years ago.  Knowing what we know about Cameron's obsession with the source material and devotion to his craft, it's hard to imagine any other filmmaker pulling it off quite so masterfully.  Simply put, the final hour of TITANIC is one of the most impressive achievements -- visually, emotionally, technically, you name it -- in the history of movie-making.

But hey, enough gushing about a movie we've all seen and, at this point, either love or hate regardless of anything I've written here.  The real question is: How does it look in 3D?  In a word: FANTASTIC. Post-converted 3D has been a slippery slope over the past couple of years -- more often than not, it looks like crap, especially compared to films that were specifically filmed with 3D cameras.  High-profile re-releases like BEAUTY AND THE BEAST, THE LION KING and STAR WARS: EPISODE I looked... okay... but nothing special beyond the pleasure of seeing them on the big screen.  Fortunately, aside from being the King of World, James Cameron is also the King of the Third Dimension, and he spared no expense. What's interesting is that the 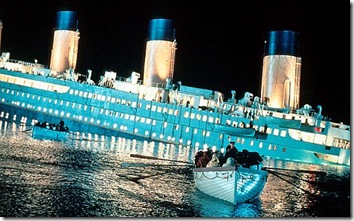 movie already had an immersive feel, loaded with so much detail that it practically touched upon all the senses.  But the 3D effects definitely serve to enhance the experience, adding new levels of visual depth, as well as working in more subtle ways when appropriate. It's incredibly well done.

There were three moments that I was really curious to see in 3D, as I felt they might serve as shining examples of its effectiveness (or not).  First was the sequence where Rose is making her way through the flooded lower-deck corridors looking for an imprisoned Jack. Next, an overhead shot of Jack & Rose fleeing down a staircase while Hockley is shooting at them from above, and a bullet hits the water and sends a splash back up towards the camera. Lastly, the climactic, first-person shot of the ship's final plunge into the ocean. If (when?) you see the movie, keep an eye out for these scenes in particular -- they all worked perfectly and made me very happy. (Also, Kate Winslet's curves in 3D? Spectacular.) 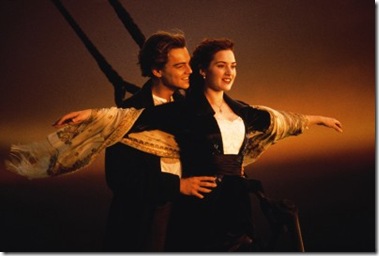 James Cameron didn't need to convert TITANIC into 3D. It's not like Scorsese's HUGO or Wenders' PINA where the technology is integral to the intended movie-watching experience. But if his intention was to prove that, when done right, post-converted 3D can be just as good as the real thing... well, he has succeeded. Of course, if you're a TITANIC fan, you owe it to yourself to see one of the grandest movies ever made on the big screen once again, regardless of the number of dimensions.  And if you've never seen it on the big screen because you were too young 15 years ago or something... you, young whippersnapper, are in for a treat.  Personally, I saw TITANIC four times during its original theatrical run... once at a special screening in 2002... once at the 3D advance screening in February... and yes, I'll be seeing it again tomorrow. Is my heart still going on after all these years? Yes, yes it is... and I'll never let go.