TRON: LEGACY Will Make Sweet Love to Your Eyeballs

My relationship with TRON goes back to the early ‘80s, but it wasn’t so much because of the movie -- it was because of the awesome handheld video game that I played constantly as a five-year-old. I’d seen the movie, but my young mind didn’t quite grasp its complexities at the time. The game, however, I loved -- so I knew all about light cycle races, disc wars and the Master Control Program from an early age. As I got older, I rediscovered the movie and appreciated it for the groundbreaking slice of awesome that it is. 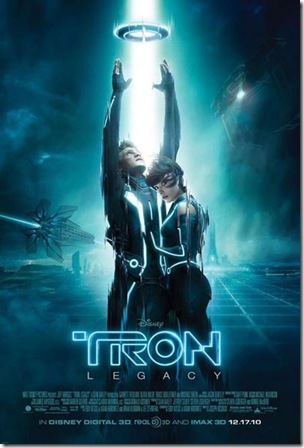 And now, 28 years later, Disney gives us a sequel, TRON: LEGACY. I saw it last night in glorious IMAX 3D, and it was a sight to behold. Definitely one of the great visual cinematic experiences I’ve ever had -- the kind of movie where you sit there with your jaw hanging open the entire time, where you can probably watch the movie 100 times and never see everything there is to see. It takes the iconic imagery of TRON and pumps it up to ridiculous levels of magnificence, while dutifully expanding on the canon for a new generation. This has been a topsy-turvy year for 3D technology -- there have been some winners (TOY STORY 3, HOW TO TRAIN YOUR DRAGON and TANGLED) and some big losers (CLASH OF THE TITANS, SHREK 4 and the new NARNIA) -- but if you can only pay to see one movie in 3D for the foreseeable future (preferably IMAX, ideally on the 80’ x 100’ screen at Loews Lincoln Square), it should be this one.

First-time director Joseph Kosinski does a fantastic job of treating the source material with reverence and the movie is loaded with iconic visuals. When Sam Flynn, the troubled, orphaned son of long-missing Kevin Flynn, first enters his father’s arcade and unsheathes the classic TRON arcade game, it’s a cool geek moment -- and this film is loaded with many, many such moments. The Disc Wars are particularly awesome and the updated Light Cycles and Recognizers are off-the-charts cool. Insanely detailed scenery, neon lights everywhere and adorning everything, hot chicks in tight white bodysuits… this movie is an extravaganza and defies description. Hell, even the “Walt Disney Pictures” intro is TRON-ized and earned applause from the electric crowd. And the whole thing is driven by a relentless, pounding, epic score by Daft Punk that is among the best and most essential I’ve heard all year (and this has been a remarkably good year for movie scores).

But the soul of this franchise is Jeff Bridges, thankfully reprising his roles as both the creator of the Grid, Kevin Flynn, and his rogue creation, Clu. Seriously, is there a cooler actor these days… maybe ever? He has long been the man (or the Dude, as the case may be), and he finally won his first Oscar last year for the excellent CRAZY HEART, but this year, between the Coen Bros.’ incredible TRUE

GRIT (for which I believe he should win his second Oscar) and TRON, he continues to add to his legend. He is just the epitome of all that which is cool. Seeing his younger self on screen (thanks to the same technology they used in BENJAMIN BUTTON -- the only good thing to come from that movie) is nothing short of astonishing. Also great to see Tron himself, Bruce Boxleitner, back in action -- if Bridges is the soul of the franchise, then Boxleitner is the heart. Garrett Hedlund does a serviceable job as Sam, Michael Sheen is solid as a flamboyant, mysterious nightclub owner, and Olivia Wilde is smoking hot as Flynn disciple Quorra (though personally, I was digging supermodel Beau Garrett as one of the sexy sirens even more).

Story-wise, the movie is fairly basic… but it’s basic in the same way that AVATAR was basic, which in turn was basic in the same way that STAR WARS was basic. That is to say, they all have simple storylines, relatable archetype characters and easy-to-follow plots, the purpose of which is to draw the general public into new worlds that have all sorts of exciting, crazy, complex ideas bubbling under the surface. STAR WARS fleshed out its ideas in later installments, once the public was sucked in -- I’m guessing that is Cameron’s plan for his AVATAR sequels, and what Disney has in store for TRON, too. The original TRON actually has a very complicated story, which, combined with the groundbreaking special effects, made for a polarizing experience -- either you got it and loved it, or you didn’t.  I don’t want to say that TRON: LEGACY dumbs down the story, because there’s still a lot of complex stuff going on… but it definitely simplifies things and makes it more accessible for general consumption. This is not your computer geek cult favorite TRON anymore -- this is something that Disney hopes will finally become a major franchise.

And frankly, I hope it works, because I’d very much like to return to the Grid in the not-too-distant future.  In this geek’s view, TRON: LEGACY very much lives up to the hype. It’s a feast for the eyes that provided me with innumerable visual orgasms during the course of its two hours. It has a simple-but-engaging story that should appeal to old-school Tron geeks and newcomers alike. And certainly, if you ARE one of those Tron geeks, this movie should get your heart a-fluttering. Tron Rules!

Now, somebody please go on eBay and get me this for Christmas: 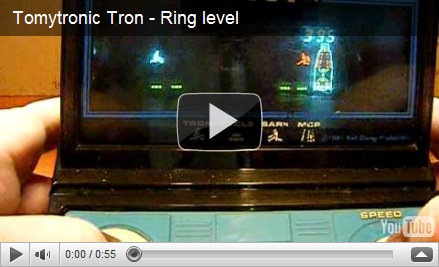