At first, the concept of a movie about Facebook seemed a little silly.  For one thing, the site has only really been around for, what, six years?  Who knows what its place in the grand scheme of things will be six years from now.  (Remember, Friendster was a pretty big deal in 2003.)  Turns out, though, that the events leading up to the creation of Facebook were kind of fascinating, and in many ways, represent the fast-paced, detached-from-reality mindset of the early 21st century.  Directed by the great David Fincher, with an electrifying script by Aaron Sorkin and featuring a stellar cast of young talent, THE SOCIAL NETWORK has emerged as not only one of the best movies of the year, but one of the more important films of its generation. 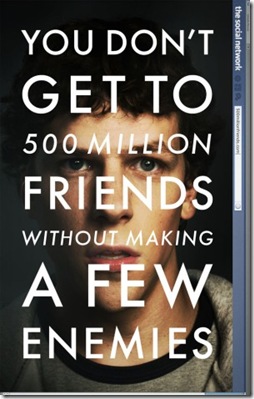 The story begins with one of the most painfully awkward breakups you'll ever see on screen.  Harvard computer science geek Mark Zuckerberg sits in a bar with his girlfriend and they talk about... well, it's hard to say and even harder to keep up.  The conversation is loaded with double-talk and rapid-fire, back-and-forth dialogue -- Zuckerberg's mind clearly works at a ridiculously fast pace, tiring of topics and moving on to something completely unrelated even before the other person has a chance to respond.  It's a fascinating introduction and immediately displays that Zuckerberg may just be too smart and self-involved for his own good.

After the breakup, Zuckerberg embarks on a wild journey of vengeance, creation, wheeling & dealing, deception and incredible genius.  Reputations are made, friends are forsaken and douchebag frat boys are screwed over (from a certain point of view, this movie occasionally plays like REVENGE OF THE NERDS for the Internet age).  The surprisingly-enthralling plot unfurls like a whirlwind and Sorkin's script is so snappy & exciting, loaded with incredible dialogue, great drama and blistering confrontations that it sometimes feels like an action movie.  And Fincher's touch is no less magical -- the man has his finger on the pulse of humanity like few filmmakers working today.  His signature visual style fits the story perfectly -- this film could very easily have taken place in the same dark universe as SEVEN, FIGHT CLUB and ZODIAC.  Great score from Trent Reznor (!) and Atticus Ross, too -- one the year's best & most memorable (though I am still partial to that thundering INCEPTION theme).

Acting-wise, the movie is a revelation.  I've been a Jesse Eisenberg fan since seeing him in ROGER DODGER ten years ago, and I am confident that this will be the movie that finally erases his "poor man's Michael Cera" stigma and maybe even earns him Oscar gold.  It's a remarkable performance -- the perfect combination of complete social awkwardness and cold, calculating arrogance.  He's kind of an asshole, but damn, does he know his stuff.  Equally fantastic is Andrew Garfield as Zuckerberg’s best friend and Facebook’s co-founder, Eduardo.  I've now seen this guy in three noteworthy movies over the past couple of weeks (this one, NEVER LET ME GO and the RED RIDING trilogy) and it is clear that he is one of the best young actors around and will undoubtedly kick ass as the new Peter Parker.  Justin Timberlake, meanwhile, is a scene-stealer as dot-com superstar Sean Parker (remember Napster?), who gets into Zuckerberg's head and drives him to turn Facebook into something truly legendary.  Excellent supporting cast, too, including Armie Hammer in a dual role as the entitled Winklevoss twins, and Rooney Mara (soon-to-be Lisbeth Salander in the Americanized GIRL WITH THE DRAGON TATTOO remake) as the girlfriend in that scintillating opening scene.

Now, apparently this movie was written with no help from the real Mark Zuckerberg, so who knows exactly how much is real and how much is fabricated.  But I'm willing to bet that most of it is pretty accurate.  I don't doubt for a second that Zuckerberg stole the idea from the Winklevosses, screwed over his best friend and basically alienated everyone he ever knew... but he clearly turned the idea into something bigger and better than anyone else would have done.  In the end, who cares, because even after doling out however many hundreds of millions of dollars to make the legal troubles go away, Zuckerberg is still a billionaire many times over.  And that's one of the points of the movie:  In this age of instant information, if you have an idea, you'd better run with it immediately, because if you don't, someone else will.  I wouldn't be surprised if, in a few years, this movie is linked to the disconnected '00s the way that FIGHT CLUB is to the '90s, WALL STREET to the '80s, NETWORK to the '70s.  Yes, folks, the Facebook movie is that good! 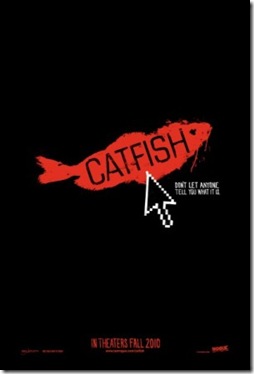 But wait, there’s more! Let's skip ahead a few years... Facebook has pretty much entrenched itself into society and become the leader of the social networking revolution.  For most people, at the very least, it has become a part of their regular daily routine, a place to share photos and catch up with old friends.  For others it is something that must be checked and browsed and updated throughout the day -- a running log of one’s daily life.  And for a select few, it is a place where one can create an entirely new persona and disappear into a twisted combination of fantasy and reality.  Which brings us to CATFISH.  If THE SOCIAL NETWORK is Facebook’s origin story, then CATFISH deals with the consequences.  It’s a story about how powerful Mark Zuckerberg's creation can be -- and how it can be manipulated for better or worse.

Simply put, it's a documentary about a guy who meets a girl through an unusual Facebook connection, develops an intense relationship with her without actually having met (lots of chatting and status-updating and photo-stalking ensue), and eventually discovers that things may not be exactly as they seem.  Determined to find out the truth, he and his filmmaking friends pay a surprise visit to the girl's house in the middle of nowhere... and then things get weird.

I am being intentionally vague about the plot because it's best to see this movie with as little knowledge as possible.  Once again (and fittingly, considering the subject at hand), there are questions as to whether or not the film is a true documentary, or if has at least been partially staged (personally, I think it’s mostly real with some cinematic embellishments)... but regardless, it is a gripping portrait of the kind of world that social networking, and Facebook in particular, hath wrought.

CATFISH is playing now in select theatres (with a wider release coming soon, I think), and THE SOCIAL NETWORK opens this Friday nationwide.  Both are must-sees -- but ideally, I recommend seeing them together in the ultimate 21st century double-feature.  LIKE!

What’s in the Box?? It’s Ryan Reynolds in BURIED!

Of all the movies I've seen so far in 2010 (and there have been a lot of them -- 96, to be exact, and it isn't even October yet), none have brought me to the edge of my seat more than BURIED, an incredible film by little-known Spanish director Rodrigo Cortes, starring a man who was previously best known for having killer abs and being Mr. Scarlett Johansson: Ryan Reynolds. 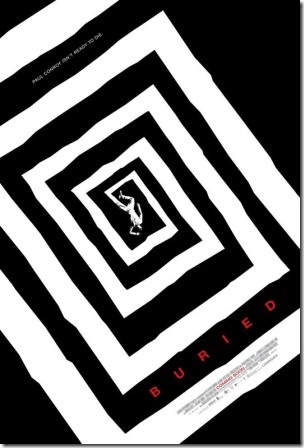 Now, I have to admit, when I first heard of this film, I was skeptical.  How much could they really do with Ryan Reynolds trapped in a box for 90 minutes?  The answer is... well, quite a lot.  The most amazing thing about this movie is that it never cheats.  It advertises Ryan Reynolds trapped in a box, and that is exactly what it gives us.  No cutaways to government agents trying to track him down, or flashbacks to happy times with his happy.  We are trapped in that goddamn box for the duration, and the result is quite possibly the most claustrophobic movie ever made, featuring some of the most creative and intricate camerawork I have ever seen.

Reynolds, whose acting chops had never really been tested until now, plays Paul Conroy, an American contractor working in Iraq, who wakes up trapped in what appears to be a simple wooden coffin buried somewhere under the desert.  After an initial freakout, he surveys the situation and finds that he has been left with a working cell phone, a lighter, a pen, and several other trinkets.  He tries desperately to contact both his wife and U.S. authorities but is given the runaround as if he was trying to switch from Time Warner to FIOS.  He hears from his captor, who demands an insane $5 million ransom.  Other twists and turns abound -- some crazy, some infuriating, some hopeful, all of which add to the ever-building tension.  And it all occurs in this tiny confined area, with extreme close-ups of Conroy's blood, sweat and dirt-stained face, using amazing macro photography on the tiniest details.  As his race against time continues, the tension mounts... and as Conroy struggles to breathe, so do we.

Simply put, this is the performance of Ryan Reynolds' career.  I've always liked the guy in such films as VAN WILDER, WAITING..., and ADVENTURELAND, but this is the first truly meaty role of his career.  I mean, aside from some voices on the other end of the cell phone, this is basically a one-man show and he knocks it out of the park.  Absolutely riveting stuff.  His only real co-star is the camera itself.  What Rodrigo Cortes has done here is truly remarkable.  The camera moves in ways I never would have imagined, using bizarre angles and perspectives to make the most of every precious inch of that coffin.  Yet at the same time, it never feels like more than it is:  It's a fucking coffin.  It's tiny, Reynolds is trapped and cramped and suffocating, with sand seeping through the cracks like some kind horrific hourglass -- which, in a way, is exactly what it is.

Obviously the movie is loaded with all sorts of socio-political commentary, but really it's about one thing:  One man's desperate attempt to survive a seemingly impossible situation.  It's a fascinating film -- one that will, if you're like me, leave you on the edge of your seat and on the verge of a goddamn panic attack by the time things come to a jaw-dropping conclusion.  We are in the midst of an unprecedented month of September, loaded with tremendous films of all kinds... and BURIED is among the very best and a must-see on the big screen.