Yes, I realize this post is three weeks late, and by now, the movie reviews herein are old news and possibly irrelevant. But it’s not my fault! July was a crazy month that pretty much threw my whole movie-watching year for a loop -- I was coasting along at a record-setting pace through June, but then only saw SEVEN movies in July due to a variety of extenuating circumstances (vacations, sickness, Pottermania, etc.). But... better late than never, right? So at long last, here’s what I saw on the big screen last month: 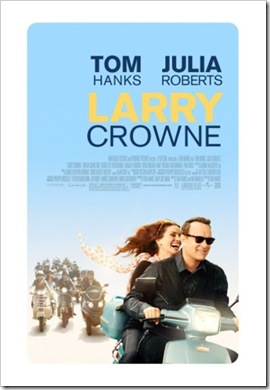 LARRY CROWNE -- A completely unmemorable film in every way, except that it could very well go down as the Worst Tom Hanks Movie Ever. I’m sure it was lots of fun for Hanks and his good friend Julia Roberts to make this movie together -- he as a longtime department store employee who gets laid off and must go back to school to reboot his life; she as a jaded college professor who needs a life-reboot of her own -- but for the rest of us... not so much. It’s unfunny, hackneyed and ridiculously bland. Sure, it deals with timely subject matter (economic woes, job loss, getting one’s life back together, etc.) but sabotages itself with awful writing and performances that lead me to believe they were trying for a breezy, off-the-cuff attitude and just failed miserably. We know that Hanks, as a filmmaker, is capable of better and more enjoyable things -- THAT THING YOU DO! is one of my favorite movies of all time -- but this was a major misfire. It could be argued that this is a harmless lark of a film and shouldn’t be taken too seriously... but in my opinion, if we are now living in a world in which Tom friggin’ Hanks can make a movie this bad, then we, as a people, have more problems than we realized. 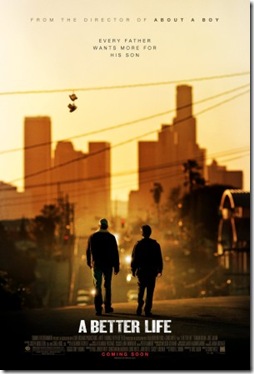 A BETTER LIFE -- Chris Weitz, director of such films as ABOUT A BOY and TWILIGHT: NEW MOON (plus he had his hands on the original AMERICAN PIE with his brother Paul), continues his journey through every movie genre with this uneven drama that tackles the subject of illegal immigrants living and struggling in Los Angeles. The story centers around Carlos, a single father who tries to keep a low profile while doing everything in his power to make a better life for his teenage son, Luis, who in turn appears to be heading down a questionable path. Eventually, Carlos gets the opportunity to run his own landscaping business, but when his truck & supplies are stolen, he and Luis search the rarely-seen L.A. backroads to try and gain back their livelihood. It’s a good, raw, potent story -- which unfortunately is completely sabotaged by some of the worst acting you’ll see in a motion picture this year. I mean... these guys are bad, to the point where it’s distracting. I understand that the guy who plays Carlos (Demian Bichir) is a famous actor in Mexico, so maybe the problem is that this was a mostly English-speaking role (similar to the problems Penelope Cruz had early in her Hollywood career, which she eventually overcame). Whatever the case, it’s a damn shame, because I liked the movie otherwise -- just would have liked it more if I didn’t cringe at every line of dialogue. 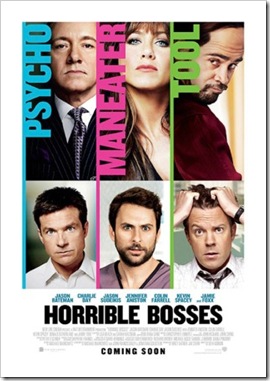 HORRIBLE BOSSES -- It’s been a pretty good summer for raunchy comedy, what with the BRIDESMAIDS and the HANGOVER PART 2 and the BAD TEACHER, but this one, about three schmoes who decide to kill their horrible bosses, mostly misses the mark. It’s raunchy, dark comedy... funny at times... but ultimately forgettable. The best thing I can say about it is that the cast is game, particularly the titular bosses, played by Kevin Spacey, Jennifer Aniston and Colin Farrell, all of whom sort of play grossly exaggerated versions of themselves: Spacey, the ultimate douchebag; Farrell, the sleazy asshole; Aniston, the sex-crazed cougar. As for the would-be boss-killers: Jason Sudekis is generally a funny guy, though I can do without what’s-his-name from IT’S ALWAYS SUNNY IN PHILADELPHIA (which I’ve never watched). But let’s talk about Jason Bateman for a moment. Now, it is common knowledge that Michael Cera has been typecast in the same George Michael Bluth role for his entire career. But I think it might be time to say the same about fellow ARRESTED DEVELOPMENT alum Jason Bateman -- he’s been playing the same Michael Bluth / straight-laced family man character for a long, long time now. Sometimes it works, sometimes it doesn’t -- in this movie, it mostly works, but suffice to say, he’s treading a slippery slope. We’re watching you, Bateman! 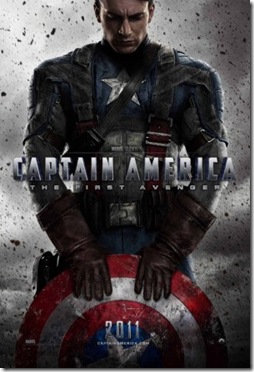 CAPTAIN AMERICA: THE FIRST AVENGER -- We’ve already seen a really good comic book movie this summer (X-MEN: FIRST CLASS) and a really bad one (THOR), but here we have not only the best of the summer, but the best in several summers. This direct lead-in to THE AVENGERS is as good as it gets -- a memorable mix of performances, action, story and sincerity, expertly crafted by Spielberg/Lucas protégé Joe Johnston, who has been on the cusp of directorial greatness for a long time (see his excellent THE ROCKETEER way back in 1991; even JURASSIC PARK III was well-made in a pulp/serial sort of way, albeit thwarted by bad writing which wasn’t his fault). Chris Evans is great as the titular captain; the special effect of him as scrawny Steve Rogers looks a world better than it did in the trailers (remember, kids, wait for the finished product before passing judgment) and makes for one of the best origin stories we’ve ever seen. In particular, the montage of Captain America as a propaganda tool is nothing short of brilliant, and his transformation to “super soldier” is appropriately epic. No surprise that Hugo Weaving makes a fantastic villain, once again confirming the theory that a superhero movie is only as good as its villain. Loved Tommy Lee Jones as the gruff-but-fair colonel, as well as Hayley Atwell and Sebastian Stan as Cap’s love interest and best friend, respectively. And I especially enjoyed Dominic Cooper as playboy inventor Howard Stark, aka the father of Tony Stark -- a prime example of great continuity with the other AVENGERS films to the point where it actually makes the crappy THOR a thousand times better, and even adds more depth to the already-awesome IRON MAN. CAPTAIN AMERICA is, quite simply, superhero movie perfection and one of my favorites of the year so far. 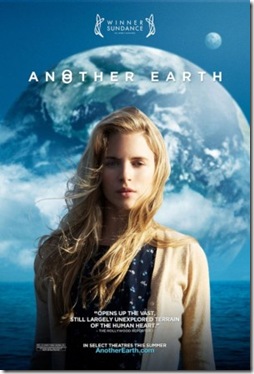 ANOTHER EARTH -- Admittedly, this movie requires some suspension of disbelief, since, y’know, if another Earth-sized planet suddenly appeared so close to home, it would wreak havoc on the gravitational pull and the tides and the climate and pretty much bring about the apocalypse. And while that sounds like it could be a good plot for the next Roland Emmerich film, it is beside the point here -- at its core, this film is about the curveballs and twists and turns of life, the search for forgiveness (from others as well as oneself) and the hope and possibility of redemption. Despite the looming “Earth 2” constantly visible in the background, the sci-fi is very subtle and the focus is on the characters: Four years after a drunk-driving accident kills a young mother & child and sends her to prison, Rhoda (Brit Marling) is released back into the world with no real direction. She tracks down John, the husband/father of the victims, hoping to apologize for what she had done, but loses her nerve and instead pretends to be from a maid service. From there, the two lost souls develop a friendship and romance (which also kind of requires another suspension of disbelief, because I can’t think of a worse decision that she could have made in this situation). Meanwhile, on the day of the accident, a second Earth was discovered within travelling distance from our own planet, which threw all of humanity into a tizzy to figure out its meaning or even whether or not it really existed. Rhoda later enters a contest to win a trip to Earth 2, with the hope of starting her wrecked life anew, but her ever-growing, and increasingly-wrong relationship with John complicates matters. Directed by Mike Cahill (who also co-wrote, along with Marling), this is one of those movies that sticks with you and makes you think long after the credits roll. 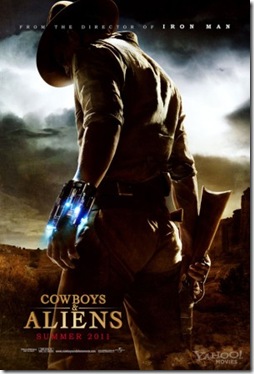 COWBOYS & ALIENS -- I had high hopes for this one because Jon Favreau has already proven that he has his finger pretty firmly on the pulse of geekdom, and giving him free reign to make this kind of genre-bender seemed like a no-brainer. Unfortunately, the first two-thirds of the film are... kinda dull and listless. It’s odd to criticize a movie for having TOO MUCH plot and character development, but I think that applies here. I wanted less of that, and more of what the title advertises -- namely, COWBOYS vs. ALIENS. Fortunately, business picks up in the final act, which is an all-out cowboy assault on the alien stronghold. Fun stuff, and the fact that it is very clearly and directly inspired by the final act of RETURN OF THE JEDI makes it even more fun. Think about it: Cowboys (Rebels) join forces with natives (Ewoks) to take down a superior enemy (Empire) in a ground battle, which is intercut with a mission to destroy the giant alien spacecraft (Death Star) from the inside. Granted, there's no direct parallel to the Luke/Vader/Emperor scenes... but everything else has a distinct JEDI feel. Of course, Harrison Ford’s presence doesn’t hurt this connection -- he once again rocks the “crotchety old bastard” role that he has perfected at this stage of his career. (I also really hope there’s some extra footage of Olivia Wilde’s nude scene that will make its way onto the interwebs someday... yowza.)

Of course, I also saw HARRY POTTER AND THE DEATHLY HALLOWS: PART 2, my epic, rambling review/recap of which can be found HERE. And don’t worry -- movie business has picked up considerably in August as I’ve scrambled to make up for lost time, and I promise that this month’s recap will be posted on time! (Well, maybe.)