Sometimes I Forget I Have a Movie Blog

*sigh*... I can't believe it's been over a month since my last post. So much for my post-Oscar blog rebirth! Then again, the summer movie season is almost here, which means summer blockbusters, which means... ahh, who knows. Anyway, here's a recap of some stuff I've seen over the past month-plus.... 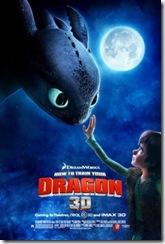 HOW TO TRAIN YOUR DRAGON -- I have to admit, I'm a little surprised that this movie has become such a phenomenon. It's definitely fun, and it looks great (especially in 3D), but I just didn't think it would have this kind of staying power in theatres, let alone the power to spawn the kind of multimedia franchise that seems to be developing. Go figure. That being said, it's wholeheartedly enjoyable for all ages and one of the better non-Pixar animated movies I've seen in a while, so I'll allow it. 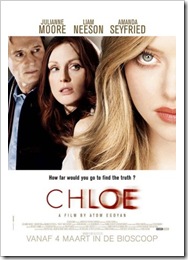 CHLOE -- A tasty erotic thriller from the enigmatic Atom Egoyan. Julianne Moore suspects that her husband (Liam Neeson, who is all over the place these days) is cheating on her, so she secretly hires uber-hot call-girl Amanda Seyfried to seduce him and find out for sure. Naturally, things do not quite go according to plan, as Amanda ends up falling for Julianne and a sticky situation ensues. It’s trashy as hell, but in a good way – and by that I mean lots of nudity, lesbian sex and indiscretions of all kinds. And did I mention that Amanda Seyfried gets naked? D’gah. Easily the hottest on-screen presence I’ve seen in some time. She’s come a long way since playing the ditzy Mean Girl whose breasts can tell when it’s raining! 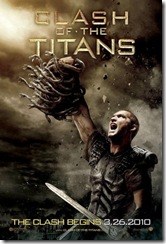 CLASH OF THE TITANS -- A while back, I made the decision to not see movies in 3D unless they were either (a) specifically filmed in 3D, or (b) put through a vigorous, intricate conversion process. Well, this movie did not meet either of those criteria, and thus, I saw it in regular ol' 2D, as it was originally meant to be seen. The result was... well, okay. It looks good visually, but everything else is just a big yawn... and really, even the visuals aren't as endearing as they were in the 1981 original. The film's true saving graces are Liam Neeson and Ralph Fiennes -- these guys chewing the scenery as Zeus and Hades, respectively, may be two of the best casting decisions we'll see all year. 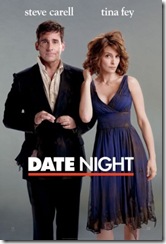 DATE NIGHT -- The mere thought of Steve Carell and Tina Fey together in a movie is enough to make one praise the comedy gods for blessing us with such splendor. Indeed, it is awesome to see the two of them play off each other -- I just wish they had better material to work with. The movie is formulaic and ultimately forgettable -- I remember laughing my ass off in the moment, but I'll be damned if I can quote any good lines now -- but Carell and Fey do their damnedest to make it work. What it boils down to is that if you like them, you will like the movie. (Also, I gotta say, Tina in sexy stripper garb is a lovely sight to behold.) Stellar supporting cast, too, including Mark "Say hi to your mom for me" Wahlberg, Mark Ruffalo, Kristen Wiig, Mila Kunis and James Franco. 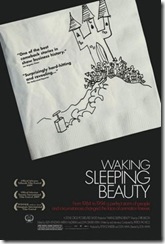 WAKING SLEEPING BEAUTY -- Entertaining & informative documentary about Disney's return to glory in the late '80s/early '90s after scuffling for years. We may never see another Disney Golden Age like when they gave us THE LITTLE MERMAID, BEAUTY & THE BEAST, ALADDIN and THE LION KING in a five-year span, and that era is all the more remarkable when you realize how far from grace they'd fallen in the years leading up to those masterpieces. The doc is loading with never-before-seen footage of the goings-on in the Disney studio at that time and is surprisingly honest and insightful. The film is backed by Disney, but they run themselves through the ringer quite a bit (THE BLACK CAULDRON outgrossed by THE CARE BEARS MOVIE, ouch!) before ultimately patting themselves on the back. A must-see for Disney aficionados and casual fans alike. 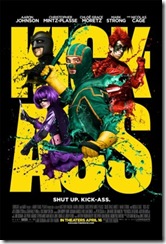 KICK-ASS -- Here's a tongue twister for you: How much ass does KICK-ASS kick when Kick-Ass and Hit Girl kick ass? The answer is... A WHOLE LOT OF FUCKING ASS. Seriously, this movie is awesome. Ridiculous. Thrilling. Intense. Brutally violent. Hilarious. Poignant. Gloriously raunchy. Bloody. Exhilarating. Completely outrageous. I could go on all day with this list of adjectives... but even if I did, I'm not sure I could properly convey just how much ass this movie kicks. All of the characters are pretty memorable. Aaron Johnson gives the titular Kick-Ass just the right mix of geekiness, bravado and naiveté, while Christopher Mintz-Plasse’s Red Mist is a classic foil. Nic Cage, meanwhile, is perfect as Big Daddy, a Batman-esque antihero who makes you think that maybe, just maybe, they SHOULD have given Cage a shot as Superman back in the day. But the real show-stopper is Chloe Moretz as Hit Girl, the ruthless, foul-mouthed, 11-year-old vigilante killing machine. Holy shit, does she own this movie. Her character is wrong on so many levels (and will quite possibly inspire a whole new generation of creepy old men), and yet, she kicks such a tremendous amount of ass that every time she disembowels someone or drops the C-word, you cringe and exult at the same time. The whole thing is just insane. This movie is definitely not for everyone and that’s fine -- it knows exactly what it wants to be and exactly the audience it wants to play for -- and as far as I’m concerned, the result is one of the most wildly entertaining, ass-kicking movie experiences of the year! 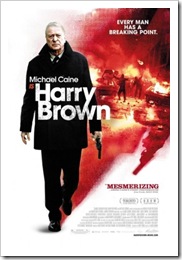 HARRY BROWN -- No, this is not a bad '70s porn title, but rather an icon returning to his roots. Once upon a time, Michael Caine was one of cinema's biggest badasses in films such as GET CARTER, THE ITALIAN JOB and ALFIE (I'm talking about the '60s and '70s originals, not the inferior remakes that came out last decade), and this is a nice throwback. Caine plays a quiet old man who is pushed over the edge after his best friend is killed by the violent gangs that terrorize his London neighborhood. Overall, the movie isn't that great, but Caine rules and it is a thrill to watch him lay the smackdown on a bunch of candy-ass drug dealing punks. In many ways, this movie reminded me a lot of Michael Douglas's FALLING DOWN -- the fundamental difference being the main characters' motivations for going vigilante -- but regardless, that'd be a hell of a double-feature! 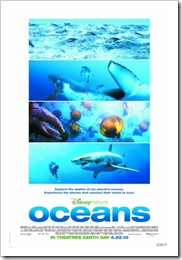 OCEANS -- I guess it is now a tradition for Disney to come out with a new DisneyNature production every Earth Day. Last year was EARTH; this year, OCEANS. It is always pretty spectacular to see these well-produced nature docs on the big screen, and there were several memorable moments (the flock of gulls dive-bombing into the ocean to catch fish is particularly cool) but as far as overall content and awe-inspiring visuals are concerned, EARTH was way better. (Though my favorite cinematic nature doc remains WINGED MIGRATION, which I actually saw twice back in 2003, including once in IMAX!) Next year's installment is apparently called AFRICAN CATS... so, in other words, a real-life LION KING? Circle of life, indeed! 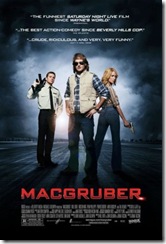 MACGRUBER -- In the long, tumultuous history of SNL-skits-turned-movies, there have been far more misses than hits. MACGRUBER, a skit whose entire punchline is based on the fact that it is 30 seconds long, is one of the last of the current recurring characters that I would have expected to get the full-length treatment... and while it's certainly no WAYNE'S WORLD... somehow, it works. It doesn’t open till July, but I saw it at an advance screening the other day. It's dumb as hell, but in a good way -- loaded with hard-R-rated raunch and non-sequiturs and frankly, I laughed my ass off throughout. (Great cameos by a bunch of WWE wrestlers, too... hehe.) Basically, if you're a fan of stupid funny ridiculousness, you will get a kick out of this. Will Forte is hilarious, and Kristen Wiig continues to prove that she is quite possibly the best female SNL cast member since Gilda. How about a Judy Grimes movie next? (Just kidding just kidding just kidding!)