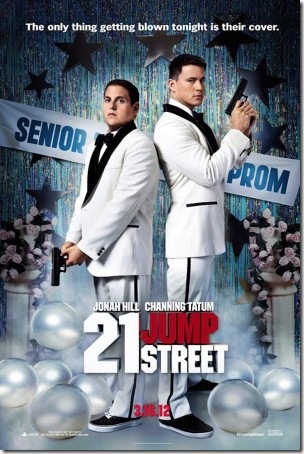 There’s a moment early in 21 JUMP STREET in which the police deputy explains to officers Schmidt (Jonah Hill) and Jenko (Channing Tatum) that the department’s new undercover program, wherein young-looking cops are sent back to high school to root out crime, is actually a rehash of an old program from the ‘80s because they’re out of original ideas. This is clearly meant to give the impression that we're about to embark on a smart, hip journey with an R-rated action-comedy that is cleverly aware of its roots, as well as its own silliness.

The truth is, that obvious meta joke is about as clever as it gets.

My guess is that co-writer/producer/star Jonah Hill and directors Phil Lord & Chris Miller were fans of the eponymous TV show that launched Johnny Depp’s career and decided that it'd be cool to remake it with a raunchy comedy twist. This may have sounded great on paper, but in practice, there's not much there. As an action film, it's not terribly exciting and as a comedy, it's not particularly funny. It doesn't even hold any nostalgic value for me, as I'm not sure I've ever seen a single episode of the show, though I'm sure the kitsch factor will appeal to some. Frankly, this movie struggles to achieve even the inoffensively-mediocre standards set by previous unnecessary ‘80s remakes such as THE KARATE KID and FOOTLOOSE.

In this version, Schmidt and Jenko are high school rivals (Schmidt was a fat loser; Jenko a jock bully) who later become friends when they help each other make it through the police academy. After graduating, they botch their first arrest attempt and find themselves reassigned to the undercover Jump Street division. They are sent back to high school to locate the source of a new synthetic drug and are meant to reprise their roles as geek and jock, but due to a case of mistaken identity and the fact that the school is weirdly post-modern, they suddenly find their roles reversed: Schmidt is now considered cool and Jenko is the outcast. Naturally, hijinks ensue. There's a lot of high school humor, action scenes and explosions, loud parties, even an over-stylized acid- 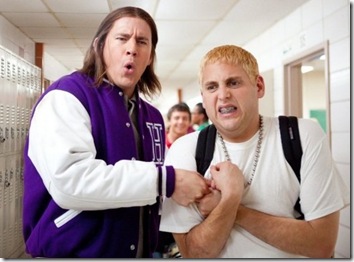 trip. The film earns its R-rating with pervasive language and such, but save for a few of mild chuckles and here and there, just about every joke, gag and one-liner fall flat. (Admittedly, business does pick up a bit in the last half-hour with some solid climactic action and one particularly mind-blowing revelatory moment. If only we didn’t have to sit through 90 minutes of unfunny crap to get there.)

As a buddy-action-comedy duo, Hill & Tatum are... okay, I guess. The role-reversal / high school dynamic could have been interesting, but everything is so yawn-inducingly contrived. Of course former geek Schmidt will finally find out what it's like to be popular and let it go to his head. Of course former jock Jenko will eventually come to embrace his new geek brethren. Practically every plot point is predictable and uninspired -- which might not have been a big deal if it had some genuine laughs to fall back on.

I like Jonah Hill a lot, but I’m not sure what to make of him at this stage of his career. We know that he is capable of hilarity both extreme (SUPERBAD) and subtle (CYRUS) and has it in him to be a fine actor beyond our wildest expectations (MONEYBALL). But I’m not convinced that he is quite good enough to rise above crappy material. His worst movie, last year’s THE SITTER, was a trainwreck, and Hill’s shtick brought very little to the table. Unfortunately, the same holds true here. As for Channing Tatum, it’s clear that his talents do not extend much further than his past world of male 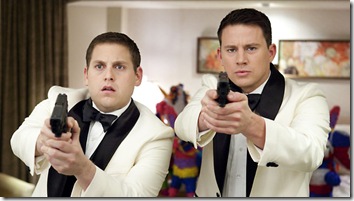 modeling. On the scale of acting ability among current popular young stars, he ranks somewhere alongside Taylor Lautner and Sam Worthington. He has zero charisma and comic timing -- at times, it feels like they thawed out a Neanderthal, nudged him onto the set and let him mumble and lumber around in front of the camera. This might be sufficient in the sleepy romantic dramas for which he is primarily known, but in a fast-paced comedy like this, his shortcomings are all too evident.

On the supporting side, you’ve got, um, Ice Cube as the angry police captain who curses a lot and Rob Riggle as a creepy gym teacher... not exactly ground-breaking work for either of them. All of the high school kids are completely forgettable -- though one of them is James Franco’s younger brother, which is a mild curiosity. One bright spot in the cast is Ellie Kemper, who is quickly becoming the best part of everything she’s in. She manages to generate some laughs as a kooky science teacher with the hots for Jenko; unfortunately, she only has a handful of scenes.

21 JUMP STREET is currently 94% fresh on RottenTomatoes. The Twitterverse is abuzz with people who loved it and thought it was hilarious. It looks primed to be huge hit when it opens this weekend. All of this is just baffling to me. Not sure I've ever disagreed with my fellow critics and the general public more (last time was probably my anti-Natalie Portman / BLACK SWAN tirades, but at least that movie has some camp value). I mean, listen... I didn't need this to be some gritty reimagining of the source material (which would have meant nothing to me, anyway). I get the kind of vibe they're going for. The problem is that it’s just not funny. Am I being a little too harsh on what is essentially a silly popcorn flick? Perhaps. But if this is what passes for quality, universally-praised comedy these days, society is in bigger trouble than we thought. My only hope is that someone, somewhere, will read this and choose not to see it, and then maybe catch a few minutes on HBO in a few months and silently thank me for saving him or her $13. To that person, I say: You’re welcome!