M. Night Shyamalan is the DEVIL! 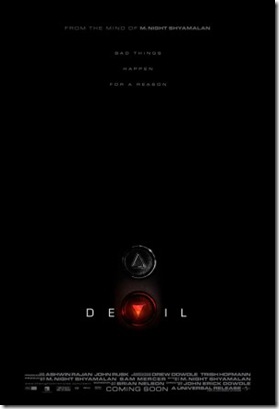 Seriously, I think that is the big secret behind DEVIL, the latest piece of trash “from the mind of M. Night Shyamalan.”  The movie is about a group of strangers who get stuck in elevator. Seems harmless at first... then strange things start happening... then people start dying.  Could one of the prisoners be a murderer? Or is this the work of the devil himself?

Well, we know it’s the devil because the voiceover at the beginning of the movie pretty much tells us so.  It explains that sometimes, the devil likes to walk among us and take human form and wreak havoc on our bodies and poison our minds before ultimately claiming our souls. So that settles that.

The question is, which one of these seemingly-normal people is the devil in human’s clothing? Is it the burly security guard? The douchebag mattress salesman? The sassy hottie? The annoying old lady? The mysterious 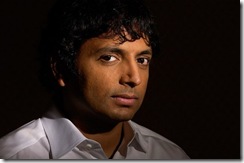 scruffy dude? Having seen the movie, I know the answer... or, rather, what M. Night wants us to believe is the answer.  Because the real answer is that M. Night Shyamalan is the devil himself... and with each film that he unleashes upon the world, he will continue to wreak havoc on our bodies and poison our minds, just like the parable says. And someday soon, he will claim our souls.

Here’s some proof:  While this movie was based on an idea by Shyamalan, the screenplay was actually written by a guy named Brian Nelson, who also wrote the screenplay for HARD CANDY, an excellent, taut, well-written thriller that introduced us to Ellen Page several years ago. But DEVIL is... so... damn... bad.  It’s really astonishing.  Remember how bad the dialogue was in THE HAPPENING?  It’s that bad.  I now see that it wasn’t Mark Wahlberg’s or Zooey Deschanel’s fault that they sucked so much in that movie -- the devil made them do it.  Similarly, M. Night must have gotten into Nelson’s head and forced him to write this demonic drivel. Ridiculous characters abound and plot twists come and go that make absolutely no sense... or even worse, they do make sense but are completely fucking stupid.

If I’m right and M. Night Shyamalan is indeed the devil (further proof: ALL HIS MOVIES TAKE PLACE IN PHILLY!), I am not sure that he can be stopped.  He is going to continue to torment us with these movies, whether he writes & directs them himself or passes them along to another tortured soul as part of his godless “Night Chronicles.”  All we can do is be ready when he strikes.... 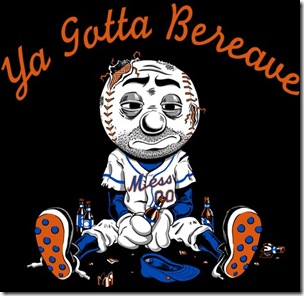 *sigh*... I guess I should write a few words on the end of the Mets' 2010 season. Well, it wasn't good. Record-wise, the team improved over last year, but really, it felt like more of the same old crap. There was a brief, shining stretch in June when things seemed to finally come together and the Mets actually reached first place for a day or two... but that quickly fell apart. The dead weight that the team has been carrying has never felt heavier. All sorts of off-field bullshit turned Citi Field into a circus and management continued to be more clueless than we thought. There were some bright spots, like the return of David Wright (too many strikeouts notwithstanding), the rise of Ike Davis, the emergence of Angel Pagan, the coming-of-age of Mike Pelfrey and the surprise awesomeness of R.A. Dickey. On the rare occasion that Jose Reyes was healthy, he seemed like his old self. Also, the overdue addition of more Mets-related stuff at Citi Field was nice (and the food options were still top-notch). These good things just weren't nearly enough to overcome the bad stuff.

And so, after today's fitting final loss (Ollie hits a batter and walks three to surrender the go-ahead run in the 14th inning... gimme a goddamn break), the season is mercifully over. Looks pretty certain that Jerry and Omar will be fired soon... maybe tomorrow. From there... who knows. Gotta hope that the team will finally bite the bullet and dump the dead weight. Hopefully they can manage to avoid paying K-Rod next year -- f’ing jackass. Probably makes sense to hold on to Beltran -- figure we'd have to pay most of his salary to unload him, so we might as well pay him to play for us. Gotta pray that Jason Bay rebounds next year, Reyes can stay healthy, Johan comes back soon, and the kids continue to grow, etc. Beyond that... I dunno. All I really want is for the Mets to field a team that is fun and exciting to watch, and if we creep back into contention, all the better. (Bringing back Bobby V would be a big step in the right direction....)

My personal record at Citi Field was actually not too shabby -- I attended 18 games and the Mets won 11 of them. Granted, there wasn't a whole lot to get excited about, regardless of the game result... but there were still a few standout moments: My triumphant return to Opening Day after getting getting shafted out of tix last year. Big Pelf shutting down the Phillies to complete an improbable three-game shutout sweep. A big six-run 8th inning comeback vs. the Nats. A 10th inning walk-off homer by Henry Blanco vs. the Giants. I got to hang out in the Acela Club on a nasty September night. And how about the fact that I won the Mets Speed Text Challenge not once, but TWICE! Christos Steakhouse, here I come!

(For the record, the worst game I attended this year was a 14-1 drubbing at the hands of the Diamondbacks, highlighted by one of Ollie's most dismal appearances. And it was made even worse by the fact that the game followed the Mets Hall of Fame induction of '86 heroes Darryl Strawberry, Doc Gooden, Davey Johnson and Frank Cashen. Oy.)

So, what will 2011 bring for the New York Mets? Beats the hell of out me. Youth? Promise? Stability? Fire? Basic fundamentals? Some combination of these things would be nice. As usual, the groundwork is there -- I'd build my team around Wright and Reyes every time -- now let's see if the youngsters can flourish and management can do what they need to do and put together a team that we can be proud of. It’s becoming increasingly more difficult, but I still believe. LET'S GO METS in 2011!

Oh, and here’s hoping for a Rays-Reds World Series! (Or, really, anything but the Yanks and Phils.)

Just sitting here on this lazy Saturday night, listening to Trent Reznor's awesome soundtrack to THE SOCIAL NETWORK (which, by the way, you should really be seeing tonight instead of sitting around reading this blog), and thinking about other movies inspired by popular websites that I'd like to see.  Wait... what's that? You'd like to see a top 5 list? Well, glad you asked, 'cause I’ve got one. Ready? GO!

5.  A TESTIMONIAL TO FRIENDSTER -- A once fun, cutting-edge world becomes a desolate, post-apocalyptic wasteland almost overnight after precious resources are discovered elsewhere.  A handful of survivors linger, only to find themselves on the run when an army of extraterrestrials come down and claim the land for themselves.

4.  THE HAMPSTER DANCE... OF DEATH! -- Sometime in the not-too-distant future, a plague of man-eating rodents wreak bloody havoc on a sleepy Midwestern town.  The fabled Hampster Dance theme, thought to have been long forgotten since the late 1990s, will be a maddening death knell to all who hear it. 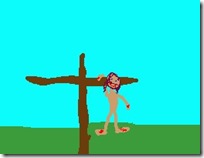 3.  THE BASTARD SON OF THE LORD HOMEPAGE: THE SECOND COMING -- A raunchy sex comedy and unflinching commentary on religion starring Nicolas Cage as Jesus H. Christ, Russell Brand as Satan and Jason Bateman as webmaster Steve.  The movie will be lambasted by Christian groups and the Pope himself, but the song "Put a Little Christ in You," as performed by the Magnetic Fields, will be nominated for a Best Original Song Oscar.

2.  GEOCITIES: THE MOTION PICTURE -- A computer geek is accidentally sucked into an alternate dimension filled with flashing lights and mismatched colors and bizarre images and endlessly repeating bits of music and sound clips and frames and pop-ups and things that have absolutely nothing to do with anything... and as he tries desperately to escape, he slowly descends into madness.