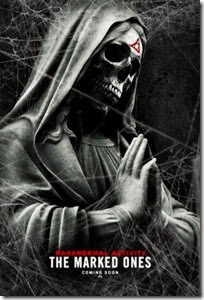 PARANORMAL ACTIVITY: THE MARKED ONES -- Hard to believe that last year was the first time since 2003 that we were not able to celebrate Halloween with a new SAW or PARANORMAL ACTIVITY movie. Not gonna lie... this made the holiday feel weird and unceremonious. To make up for lost time, in 2014, we’ll be getting not one but TWO new additions to the latter series, starting with this “spin-off” that shifts the ghostly phenomena to a new setting, introduces new characters and eschews most of the stylistic cornerstones of the first four films (long, creepy, stationery shots, etc.). The result is a mixed bag. The new characters are even more annoying and bone-headed than previous installments, and while the film benefits somewhat from moving the camera around a bit, there are no real scares to be had. (A possessed Simon game just doesn’t have the same effect as possessed Katie standing and staring at sleeping Micah for hours.) Things do perk up towards the end when the film suddenly goes bat-shit crazy with series mythology (that’s all I can say without delving into spoiler territory), and I admit, that alone makes it worth watching. If you are not a PA fan, this installment is unlikely to win you over. But if you eat these films like Halloween candy, it should be enough to tide you over until October. 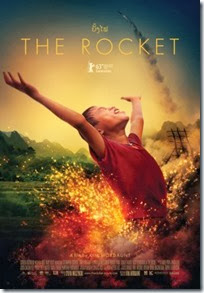 THE ROCKET -- Directed by Australian filmmaker Kim Mordaunt, this is a feel-good, coming-of-age tale about a Laotian boy named Ahlo, who, according to tribal legend, was cursed at birth because he survived while his twin died. As a result, he spends his childhood avoiding his grandmother’s skunk eye and trying to prove his worth. However, when his family is forced to seek a new home and sets out on a journey across the outback, tragedy strikes and things seem bleak. Can a random rocket-building competition help Ahlo ensure his family’s survival and break the curse once and for all? With its motivated young star (Sitthiphon Disamoe) and fantastical qualities, the film has a distinct BEASTS OF THE SOUTHERN WILD vibe. The story is simple and crowd-pleasing, performances are excellent and Ahlo’s motley crew of companions are memorable (particularly his wacky James Brown-loving uncle) --  but the film’s most effective traits may be its focus on Laotian culture, which adds great depth to the characters and their actions, as well as the landscapes themselves, which are both stunning and war-torn and tell their own visual story. 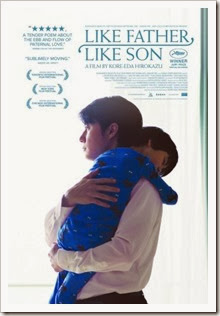 LIKE FATHER, LIKE SON -- Not to be confused with the ‘80s comedy starring Kirk Cameron and Dudley Moore, this Japanese drama tells the story of two sets of parents who learn that their respective six-year-old sons were switched at birth. What follows is a character study of two very different families who are thrown together to deal with this devastating situation. In some ways, the story teeters on the edge of cliché (one father is straight-laced and stern and emotionally distant; the other is fun and carefree and loving) and most everything that happens is fairly predictable. But there are cultural complexities bubbling under the surface, along with themes of class structure, identity, gender roles and the concept of “nature vs. nurture,” all of which director Hirokazu Kore-eda explores with an understated yet compelling touch. Rich attention to detail, especially when it comes to the families’ daily lives, outstanding performances (of both the adult and child variety) and lovely camerawork add up to a truly moving experience -- and I say that as a childless single person. If you are a dad, it will probably wreck you. 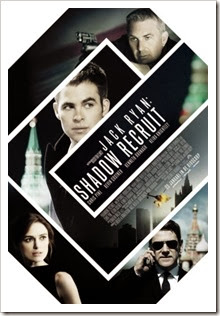 JACK RYAN: SHADOW RECRUIT -- Kenneth Branaugh directs a new Jack Ryan adventure, this time with Chris Pine filling the shoes that have previously been worn by Alec Baldwin, Harrison Ford and Ben Affleck. The result is... nothing special... yet nothing offensive, either. It doesn’t offer anything we haven’t seen before in, say, the MISSION: IMPOSSIBLE series with a dash of Bond, but it is sleekly crafted and manages to hold one’s attention. Pine is certainly no Ford, but he does an okay job. Action sequences are okay. Story (which attempts to reboot the Cold War vis-à-vis  9/11) is mostly okay. I don’t really have anything bad to say about it, to tell the truth, except maybe that Keira Knightley’s American accent is massively distracting (I mean, why bother casting Keira Knightley if you’re not going to let her use her natural accent?). Meanwhile, fellow New Yorkers should keep an eye out for both Pat Kiernan AND Annika Pergament discussing plot points from the NY1 anchor desk. You often see one or the other pop up in films, but not sure I’ve ever seen them together -- that’s how you know the plot is high-stakes! 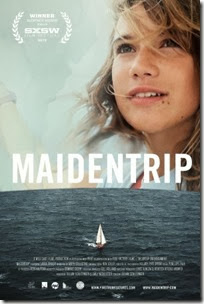 MAIDENTRIP -- A few years ago, a 14-year-old Dutch girl named Laura Dekker decided to become the youngest person ever to sail around the world alone. This documentary chronicles this unlikely feat, mostly using footage filmed by Laura herself, offering a uniquely personal and intimate -- yet still awesome and epic -- coming-of-age tale. Unlike the fictional drama ALL IS LOST, in which Robert Redford battles the savage sea in a lonely fight for survival, Laura’s experience is not quite so harrowing. She is rarely in serious danger and we already know that she succeeds in her quest. Instead, it’s her journey of self-discovery that makes this a fascinating watch. We literally see her grow before our eyes, physically and emotionally, as she comes to terms with her place in life, relationships and identity. Plus, she is funny as hell. My biggest knock against the film is that at 82 minutes, it’s too short! Director Jillian Schlesinger deftly whittles down countless hours of footage and tells a succinct tale, but frankly, I could watch an entire TV series about Laura and her adventures. 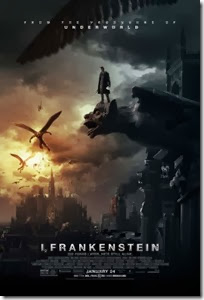 I, FRANKENSTEIN -- I made a New Year's resolution to see more repertory cinema in 2014 and fewer crappy new movies, but I felt that I had to see this one because, come December, no “Bottom 10” list could be complete without it. And that may well be true -- this movie is bad. Can't blame Aaron Eckhart for picking up a paycheck, but he should probably be ashamed of this CGI-fest in which Frankenstein's monster gets involved in an ancient war between gargoyles and demons (because, I guess, we've exhausted all other supernatural beings at this point). Awful dialogue, inane plot, cheesy effects... and perhaps most egregiously, a huge waste of Bill Nighy. Seriously, if you're going to have Bill Nighy play a Demon Prince, have Bill Nighy play a Demon Prince! Bill Nighy spouting lines like, "I am a Demon Prince! You must bow before me!" with his unmistakable voice and hand gestures would have been memorable. Bill Nighy morphing into a generic, unrecognizable CG demon is not. Oh well. On the plus side, there's actually some nice production design to be glimpsed when it isn't shrouded by whatever bullshit is happening in the foreground. 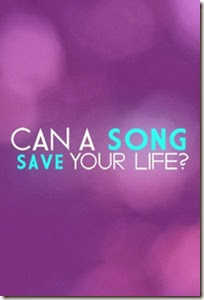 CAN A SONG SAVE YOUR LIFE? -- Back in 2007, upon first viewing, ONCE captured my heart, became one of my most beloved movies of all time and introduced me to Glen Hansard and Marketa Irglova, whose music still dominates my iPod to this day. So to say that I was excited to receive an invite to an advance screening of writer/director John Carney’s musical follow-up would be an understatement. This time, Carney eschews his previous film’s subtlety, melancholy and realism in favor of pure, unbridled sweetness. CAN A SONG SAVE YOUR LIFE? is bright and vibrant and relatively low-stakes and may require some suspension of disbelief, but if you’re willing, it works. Keira Knightley and Mark Ruffalo are irresistible as Greta and Dan, two lost souls who find each other in a NYC bar and use music (she’s a singer/songwriter; he’s a producer) to raise each other’s fallen spirits and drive the narrative. Tunes are catchy, performances are fantastic across the board (Hailee Steinfeld, who should have won an Oscar for her work in the Coens’ TRUE GRIT, impresses once again as Dan’s daughter) and it’s a nice cinematic love letter to NYC that effectively mixes iconic and off-the-beaten-path scenery. No, this movie does not recapture the lightning-in-a-bottle transcendence of ONCE, but it is very much a kindred spirit, bursting with sincerity in every frame, and made this willing viewer swoon hard and smile big. 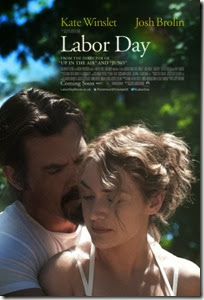 LABOR DAY -- Lonely escaped convict connects with love-starved divorcee and her teenage son in need of a father figure -- three fractured souls who help each other in life-changing ways. No, it’s not another sappy, melodramatic Nicholas Sparks romance -- it’s the latest from Jason Reitman, the great director of such films as JUNO and UP IN THE AIR. WTF? This is a baffling film. First and foremost, you’ve got a story that is so utterly preposterous to the point where you can’t even suspend disbelief to overlook the plot holes. It is devoid of subtlety, using voiceover and musical score to hammer home every possible thought and emotion. Tonally, it is a mess, mixing heavy melodrama with fever-dream flashbacks and the occasional jarring quirk. At the same time, it is almost completely humorless, and for what should be a steamy love story, it is remarkably chaste (the less said about spoon-fed chili and peach pie recipes, the better). And yet... thank God for Kate Winslet and Josh Brolin, two great actors who try their damnedest to add some nuance and emotional depth to otherwise thankless roles. In fact, they are so good that the story is often engaging in spite of itself. Set over a sweltering Labor Day weekend in 1987, the film also looks great, dripping with atmosphere and paying great attention to period detail. Ultimately, the bad far outweighs the good. I still have plenty of faith in Jason Reitman’s abilities, though, and am happy to write this off as a fascinating misstep.